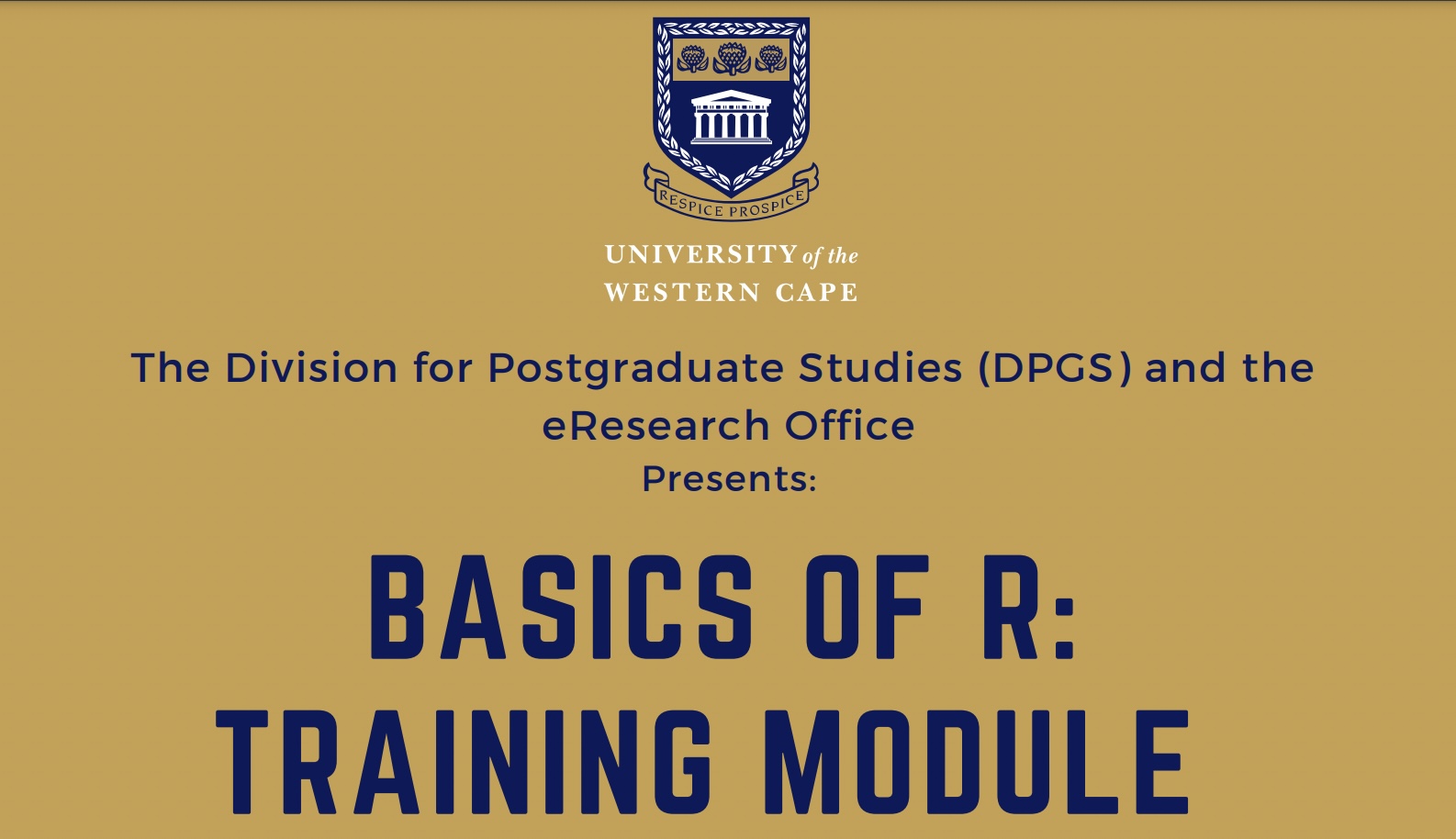 In collaboration with DPGS, a ‘Basics of R’ training module will begin on 5 July. The module will include an introductory session, after which training materials will be available through iKamva. The purpose of this training module is to equip postgraduate students with basic knowledge and skills to begin using R.

R is a programming language that is widely used by researchers in various disciplines for data manipulation, calculations and graphical display and visualisations. Anyone who would like to begin working with R as part of their research or skills development will benefit from this training module, and the lessons are aimed at people with no previous experience. 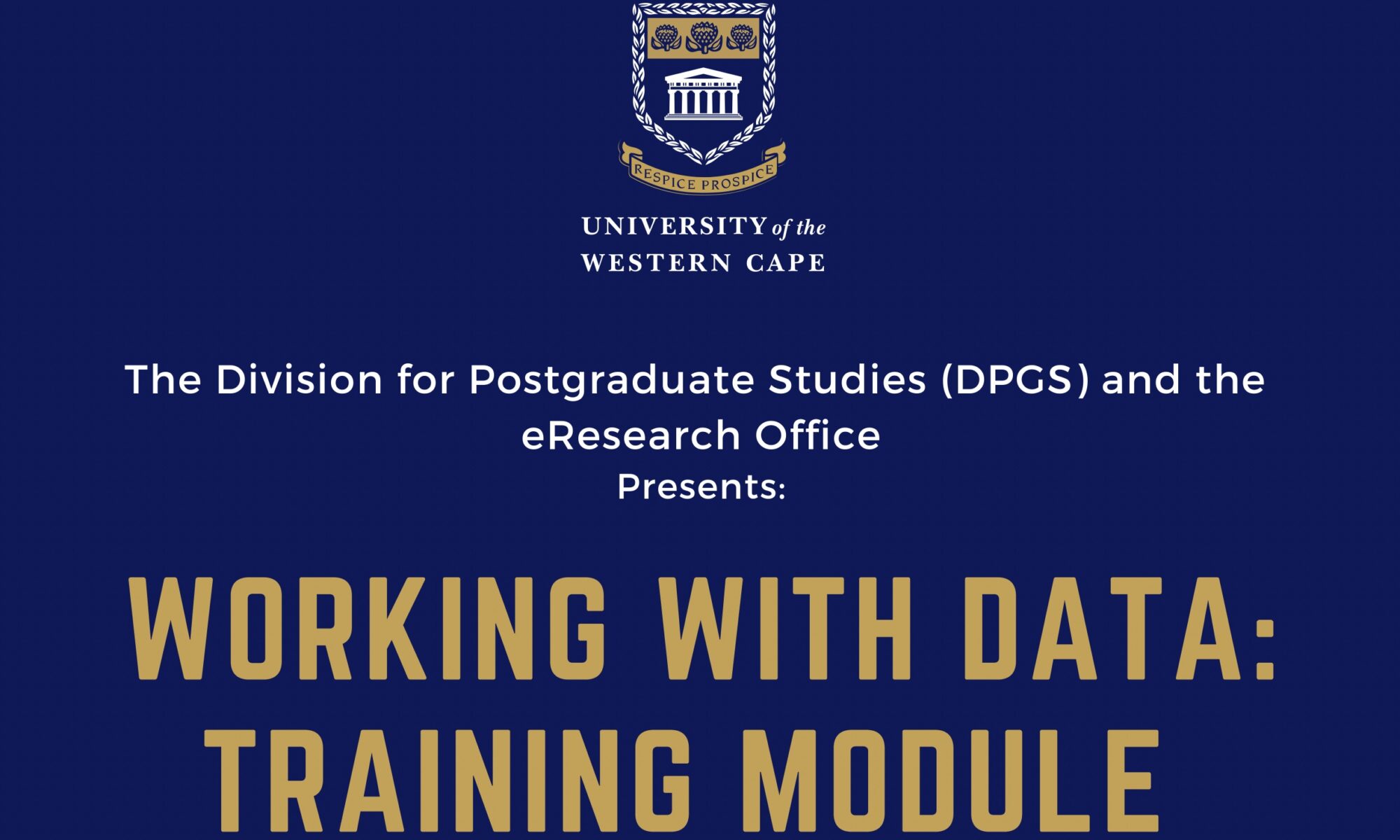 The Working with Data: Training Module, created in collaboration with DPGS, is still available on iKamva, and the Q&A session on Wednesday 8 June is an opportunity to ask questions about spreadsheets and OpenRefine.

The session is also for those who would like to begin working on the module during the vacation period.

To access the training module and the recording of our introductory session on iKamva: https://ikamva.uwc.ac.za/x/qV5MAP 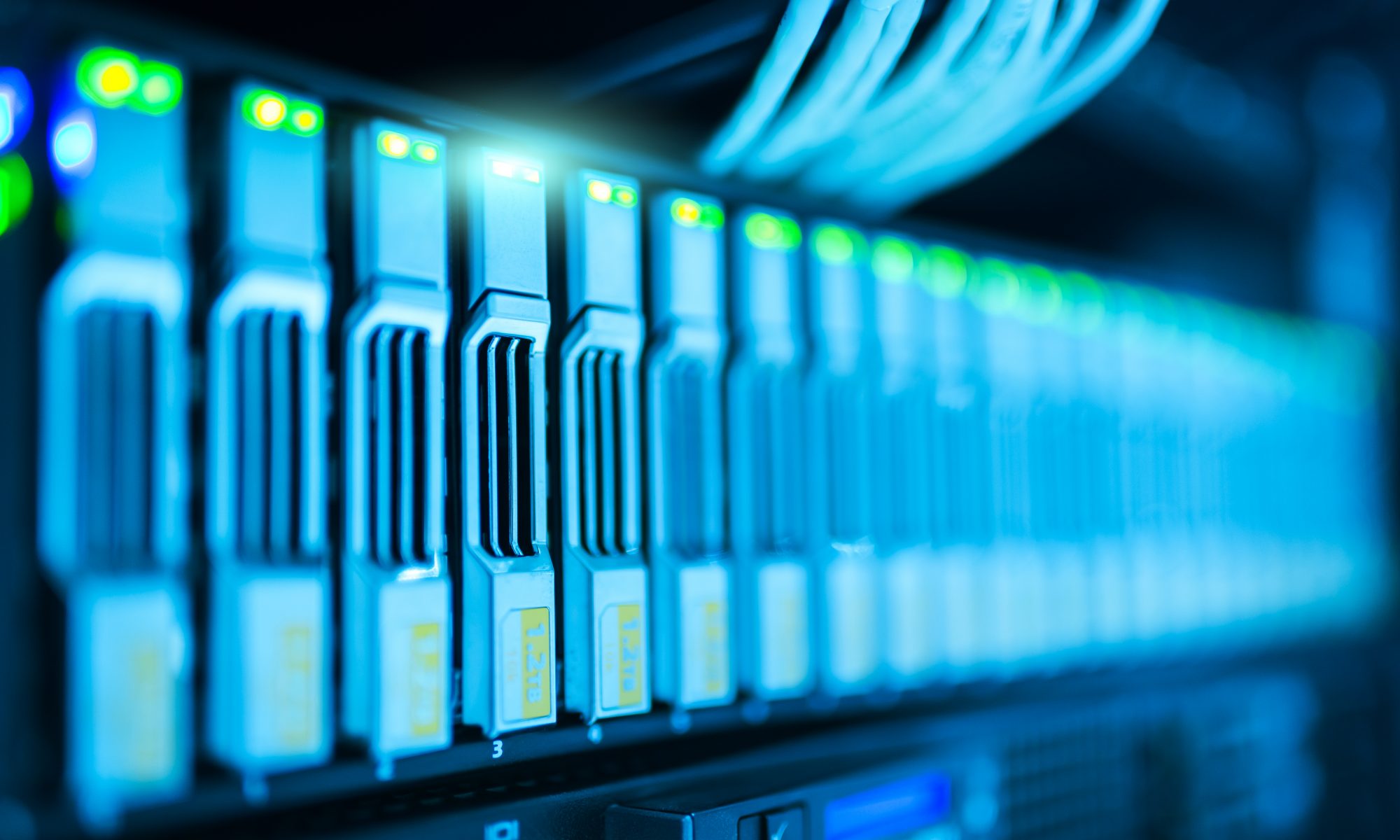 A training opportunity for data science and machine learning is available and registration closes on 25 May.

Makerere University School of Public Health (MakSPH) in Kampala, Uganda, is working in partnership with four other African universities to research the COVID-19 response in Africa. Through the collaboration, a community of practice (COP) has been establised. It is aimed at developing the capacity of African institutions to prepare, analyse and respond to disease epidemics successfully.

Participants interested in or with a background in data science, artificial intelligence, machine learning and cloud computing are encouraged to register. There is no minimum skill requirement aside from computer literacy.

Topics that will be covered include analysing the impact of COVID-19 on essential health services using time series analysis; learning from COVID-19 models to support what-if scenario analysis; and intervention planning and descriptive statistics to analyse NPIs implemented in African countries.

The training will be conducted online through Webex, with an expected engagement of about 2 hours every week. Facilitation will be in both English and French, and the programme will run until October 2022. 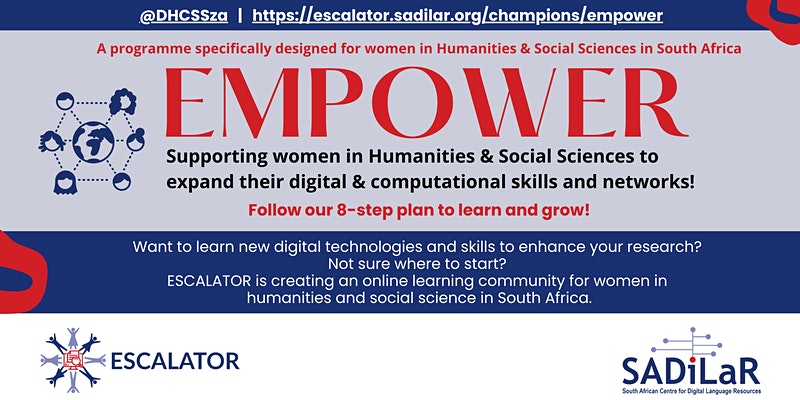 Escalator has created an 8-step programme for to learn new digital technologies and skills that enhance research.

The programme is specifically targeted at womxn in humanities and social sciences in South Africa who want to learn and enhance their digital and computational research skills. Folks from any career stage are welcome to join. This includes researchers, postgraduate students, postdoctoral research fellows, librarians, IT staff, research support positions, and related areas. The programme caters for any experience level: from complete novices to those with advanced skills.

Escalator is an exciting addition to the South Africa Digital Humanities (DH) landscape. It launched last year, and has been working closely with members of the community to understand the needs for upskilling and re-skilling and learning new tools/technologies and methodologies to enhance research in an increasingly digital world. They are excited to announce the launch of this programme, based on intentional learning principles, through which they will support learning and growth.

For the full programme, see the Eventbrite page: https://bit.ly/empower-2022
To stay informed of upcoming events through the EMPOWER track, JOIN THE MAILING LIST.

The purpose of the training module is to equip postgraduate students with the basic knowledge and skills needed to clean and organise their data using spreadsheets and OpenRefine. The lessons are based on Data Carpentry lessons.

The lesson materials will be available until 8 June.

An ongoing opportunity to build teaching skills as part of a global community is available.

The Carpentries are actively recruiting Instructors to teach Centrally-Organised workshops. These workshops (currently being held online) are a great way to connect with a global community, meet new colleagues with shared interests, and share skills with researchers around the world. The Carpentries are currently offering priority admission to our Open Instructor Training program for applicants who indicate interest in teaching centrally-organised workshops.

All applicants are welcome. No specific expertise is necessary, but they do expect that trainees will have the technical knowledge necessary to teach one or more of the core lessons from Data Carpentry, Library Carpentry, or Software Carpentry. Instructor Training events are held online, so anyone with internet access and time to share can participate.

A challenge that we face in the Humanities is providing our students (and colleagues) with an opportunity to learn about computational approaches that they can apply in their current and future contexts. This instructor training opportunity will provide training to  provide the participant with foundational lessons regarding: 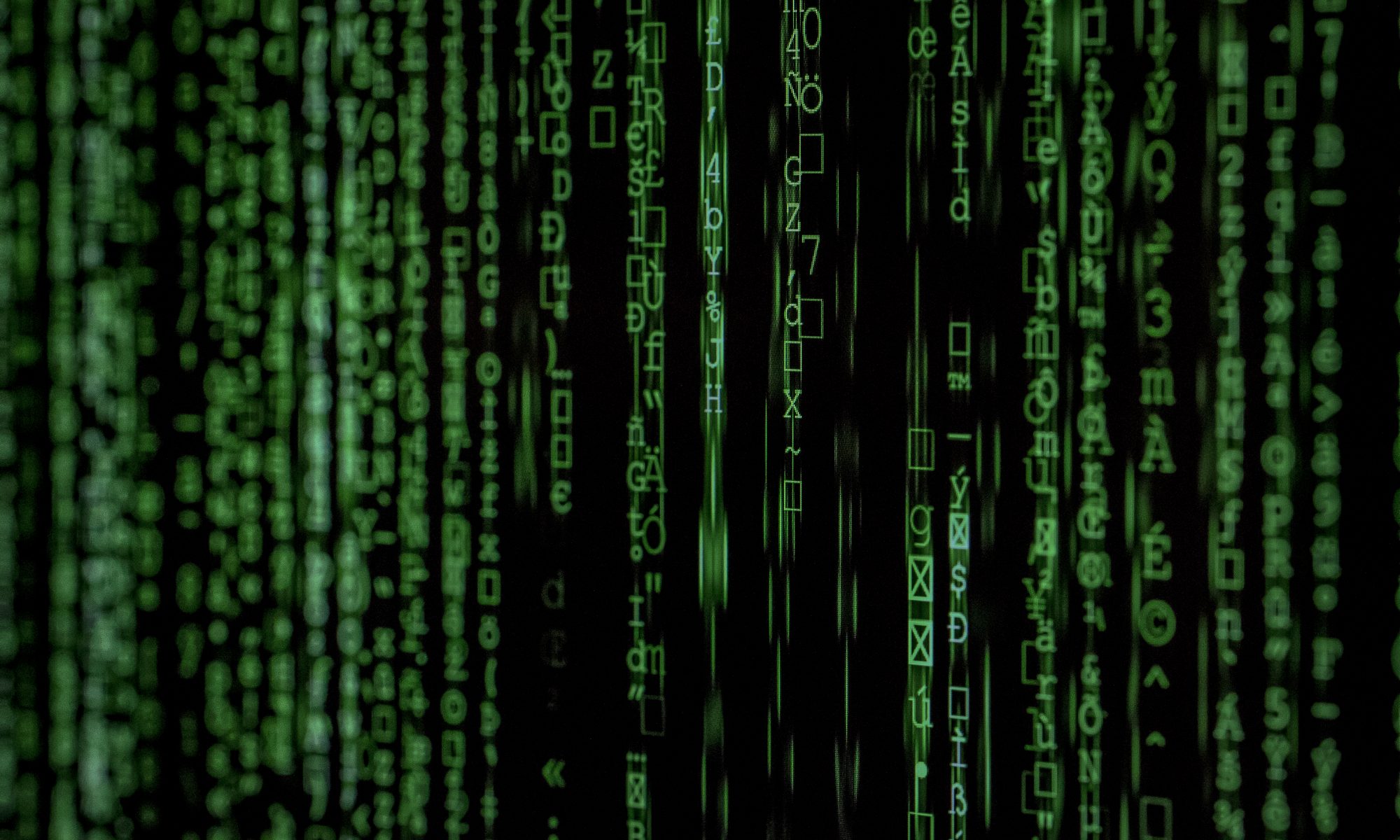 In collaboration with DPGS, a ‘Working with Data’ training module will begin on 11 May. The module will include an introductory session, after which training materials will be available through iKamva. The purpose of this training module is to equip postgraduate students with the basic knowledge and skills needed to clean and organize their data in spreadsheets and OpenRefine.

Team members Ruchelle Coetzee, Rofhiwa Matumba, Randall Buckton and Jaco Ferreira are all undergraduate Computer Science students at UWC. The team will be joined by Vanessa Dimtcheva and Edward Ramashia (from the University of the Witwatersrand) to make up the Centre for High Performance Computing (CHPC)’s team competing at the ISC 2022 Student Cluster Competition in Hamburg, Germany in May/June 2022.

Team mentor from SANBI, Peter van Heusden, provided access to training resources and assistance along the way. “SANBI has been committed to supporting the Student Cluster Competition since 2013, providing technical advice, space on our computing environment and mentorship. We are of course overjoyed at the success of Team Parallelizers!”

Jaco started forming the team in early 2021, and they started training together as soon as they had a full team. The first round of the competition started in June, and the Parallelizers qualified for the next round, which took place in November. Ruchelle, currently a third year BSc Computer Science student, says she was shocked when she found out they had won. Teams were unaware of each other’s progress, so “it was difficult to know if we were on the right track”. “I had known one thing about Linux going into this competition and that was the existence of it”, she jokes. She was aware that some of the other teams already had Linux experience, and had previously dominated the competition, so “there was a factor of intimidation added”. Jaco, a first year at the time of the competition, now in his second year of his BSc, also acknowledges how intimidated he was by the more experienced other teams. He says that this actually “helped us with a sense of competitiveness and allowed us to push that extra little bit”.

Rofhiwa was motivated by the opportunity to run software and solve problems using very powerful hardware. “As a computer science student, the competition would also provide me with a  channel to exercise my computational skills outside of my course content in a very relevant and fast-growing field”. The competition was impressive, with more than forty teams from universities across South Africa and other African countries competing in the first round. The final round was between four teams.

However, they don’t believe that it was just being the lucky underdogs that made them winners – “what ultimately gave us the victory was our team communication”, says Jaco. By speaking openly with each other, “we were able to overcome the difficulties presented by the online environment that we had to work on and were able to understand each other’s strengths and weaknesses.” Randall (currently in his fourth and final year of the extended curriculum BSc Computer Science programme), agrees. “I believe our good team chemistry along with our commitment to this competition led to us winning the competition”.

The CHPC SCC required teams to build small high performance computing clusters. They were given a selection of applications to optimise and run on their cluster to demonstrate their design’s performance. Each team was assigned a budget and a parts list (the hardware was provided) from which they designed their cluster, and the teams were judged on a combination of their benchmark results and their cluster design. Rofhiwa describes the process: “we were required to benchmark (test the running efficiency) of software that would put good use to the systems made available to us and to develop an understanding of the networking systems that enabled us to do so”.

“We worked long, hard and smart to ensure we gave it our everything, especially in the final round, and came out on top” says Randall. What does this win mean for these students going forward? “Winning this competition has boosted my confidence in myself”, says Randall. “The fact that I started with little to no knowledge on how to navigate Linux’s terminal, how to compile things and run benchmarks, and then 7 months later using all of this to win the competition is a testament to myself of what I am capable of doing”. Ruchelle also feels excited about her future. Her knowledge of Linux and cluster computing has “grown exponentially” in the last year, and her interest in the world of high performance computing has been piqued. “This competition allowed me to learn about this new world and gain heaps of exposure by learning through experience”.

“Winning has given me the confidence to pursue high performance computing as a career choice in the future”, says Rofhiwa. “I am very proud of what we have  been able to achieve as a team and as a group of friends”.

The ISC 2022 Student Cluster Competition, co-organized by the HPC-AI Advisory Council and ISC Group, will take place during the ISC High Performance Conference in June. The competition will follow a hybrid model, with some teams participating on-site and others, like the CHPC team, virtually. Final submissions are expected mid-May, after which the team will be interviewed and present their findings.

The ICS HPC (previously known as the International Supercomputing Conference) Student Cluster Competition will include “applications that address education and applied learning towards accelerating bioscience research and discovery”. The student teams will be tasked to test several applications that are used by scientists and researchers. The CHPC team will be competing amongst international peers, all showcasing their expertise in “a friendly yet spirited competition that fosters critical skills, professional relationships, competitive spirit and lifelong friendships”. South Africa has historically performed well in the competition, and although they are also juggling university work, the team has started preparing for the competition. “We are making progress by division of tasks and responsibilities”, says Ruchelle.

The call for participation for the CHPC 2022 Student Cluster Competition will be distributed in the next few weeks and will be communicated here. 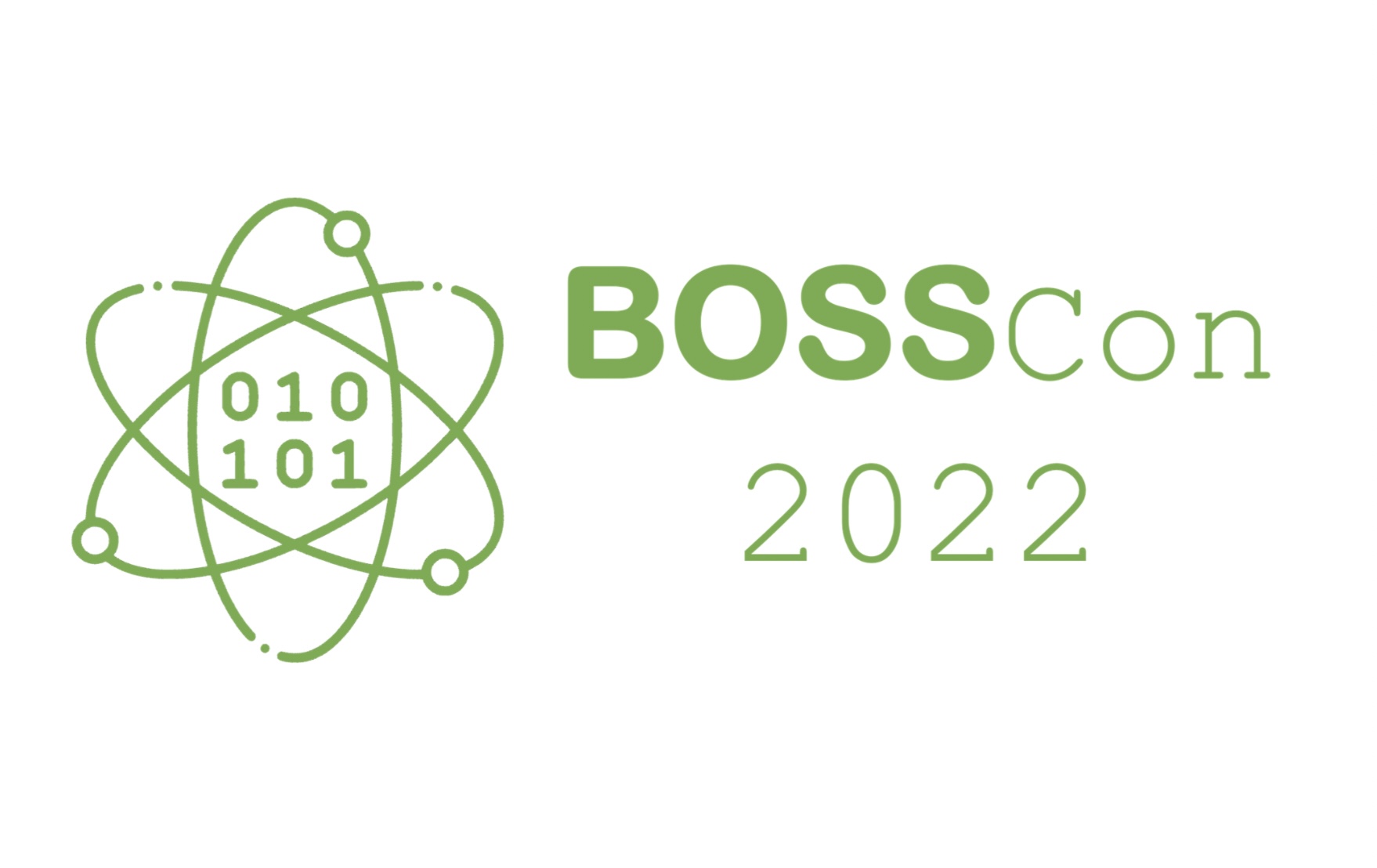 BHKi (Bioinformatics Hub of Kenya Initiative) and OpenScienceKE are hosting the BOSS conference 2022 (BOSSCon), from 26 April. It is a learning and networking event where community members will present their work, learn from mentors and interact with other researchers.

BOSSCon is the culmination of the 5 phase BOSS Events that took place from October 2021 to April 2022, funded by the CS&S events fund. The BOSSCon 2022 covers all aspects of bioinformatics and open science, including:

The conference will be virtual from Tuesday 26th to Friday 29th April 2022. Registration is free.

Register here to get meeting details and the program of the conference. 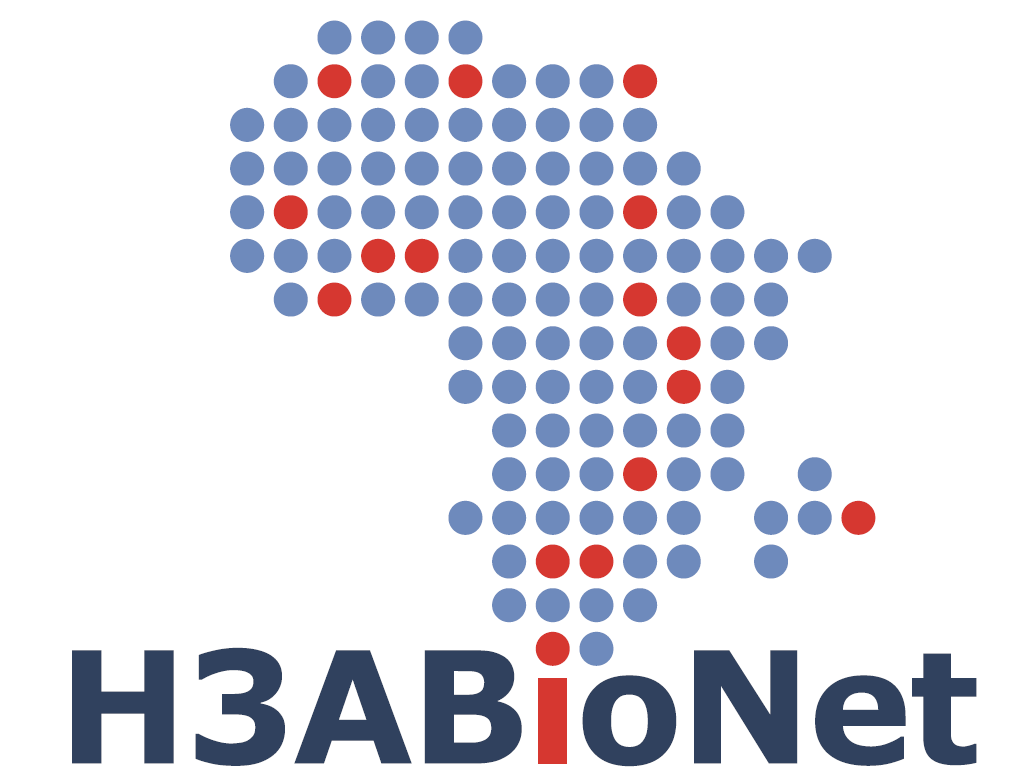 H3ABioNet is offering a short online course in Research Data Management (RDM) in June, and registration is open until 24 April. The course will introduce the principles and practices of RDM, and give practical advice for implementing these practices in African research context.

Topics that will be covered include data discovery and re-use, data documentation and organization, data standards and Ontology, data storage and security, repositories and policies, FAIR & reproducibility and best practices in developing an effective DMP.

Read more about the course.