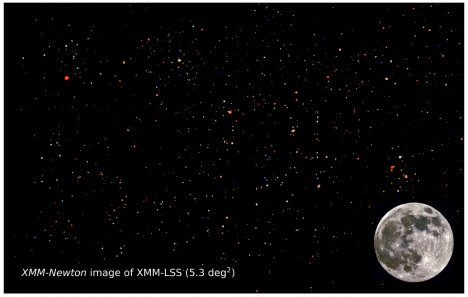 One of the largest X-ray surveys using the European Space Agency’s XMM-Newton space observatory has mapped nearly 12,000 X-ray sources across three large, prime regions of the sky. The X-ray sources represent active galactic nuclei and galaxy clusters, and the survey captures the growth of the supermassive black holes at the cores of these galaxies. This X-ray survey complements previous X-ray surveys, allowing the researchers to map active galactic nuclei in a wide range of cosmic environments.

Qingling Ni and W. Niel Brandt from Penn State presented the results of the XMM-Spitzer  Extragalactic Representative Volume Survey (XMM-SERVS) at a press briefing during the 238th meeting of the American Astronomical  Society on 7 June. A paper describing the survey, authored by an international team of astronomers including UWC’s eResearch Director Prof Mattia Vaccari, has been accepted for publication in The Astrophysical Journal Supplement. A pre-print is also available on arxiv.org.

“X-ray surveys are the best way to find growing supermassive black holes, which are located at  the cores of many large galaxies,” said Ni, a graduate student at Penn State and lead author of  the paper. “With this massive new survey, we can access population data about growing  supermassive black holes to better understand their physical properties and evolution over cosmic history.”

“This survey represents key foundational work upon which, I suspect, hundreds of studies will  be built over the next decade or two,” said Brandt, Verne M. Willaman Professor of Astronomy  and Astrophysics and professor of physics at Penn State, and one of the leaders of the study.  “XMM-Newton was the best mission to gather these data, and we needed to invest a lot of  observation time for this study—with a total combined exposure of nearly 60 days—because it  will be so important for active galaxy studies, galaxy cluster studies, and for understanding  large-scale structures in the universe. It required a multiyear, multinational effort and it’s  incredibly gratifying to get it done. We are most grateful to the European Space Agency and  NASA for their long-term support of this work.”

Caption from featured image: XMM-Newton image of the 5.3-square-degree XMM-LSS field, which is about 25 times  larger than the apparent size of the full moon (shown to scale at lower right). XMM-LSS was the  first XMM-SERVS field to have been observed by XMM-Newton. Chien-Ting Chen, a former postdoctoral researcher at Penn State who is now an astronomer at USRA, led the work for this  field (see Chen et al. 2018, Mon. Not. Roy. Ast. Soc.). XMM-SERVS provides a wide, sensitive X ray view of this region.